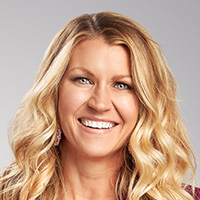 At 21 years old, Carrie Underwood had never been on an airplane—until she flew to Hollywood for her second American Idol audition.

I can only imagine how anxious she must have felt, leaving her small town in Oklahoma and getting on that plane. How scared her parents would have been, letting their youngest daughter go to Los Angeles on her own. How impossible it must have seemed for Carrie, who describes herself as “shy,” to sing on national television. She recalls, “I was . . . by myself, putting myself out there, which is a scary thing for anybody to do.”

But as author A. P. Gouthey wrote, “To get profit without risk, experience without danger, and reward without work, is as impossible as it is to live without being born.”

If Carrie Underwood had let fear keep her from travelling over 1,400 miles away and sharing her gift with the world, we may have never heard “Jesus, Take the Wheel.” And she wouldn’t have the illustrious career with countless awards and accolades or the rewarding life that she now has.

So why is pursuing something worthy—something that you love—so scary? The truth is, we’re scared because we might fail. We’re scared because we don’t think we’re good enough. And the fear of failure terrifies us because it’s elusive, subjective and abstract. And hey, you might not meet your goal. You might hit a roadblock or you might disappoint someone. So what? That’s part of life. I’ve “failed.” But so has every successful person on the planet, so you and I are in good company. You can’t succeed unless you fail along the way.

You’ve probably heard my favorite quote from Michael Jordan before: “I’ve missed more than 9,000 shots in my career. I’ve lost almost 300 games. 26 times, I’ve been trusted to take the game winning shot and missed. I’ve failed over and over and over again in my life. And that is why I succeed.”

Fear will accompany you when you do great things. It’s part of the journey. Everyone who is successful has doubted their own qualifications and had to find the courage to take that first step anyway.

There’s actually a name for this type of fear, and it’s called “Imposter Syndrome.” Ironically, those who generally suffer from Imposter Syndrome are the highest achievers! The person sitting on the couch doesn’t care if they fail, because they aren’t trying anything new.

So nip Imposter Syndrome in the bud by reminding yourself that failure is an attribute of every high achiever. Successful people have had the same fears you do, but they haven’t let those fears hold them back. Putting yourself out there comes with risk, but without it, you lose all chance of success. The fact that you’re worried about it means you’re already ahead of the game!

Here are some other ways you can overcome fear:

Fear wants us to do safe things, but God calls us to do substantial things.

So whether you’re trying out for American Idol or working up the confidence to open your first Etsy shop, don’t let fear stop you from starting. And if you stumble, just remember that every failure brings you closer to success.